A road trip to check out Christmas light displays around San Francisco is sure to get anyone into the holiday spirit. This is a wonderful and enticing road trip you can take around the beautiful city’s Christmas lights and dazzling holiday displays. The Christmas road trip around town will capture the beauty of neighborhoods like Noe Valley, Nob Hill, the Marina, Downtown, and more!

The best Christmas lights near San Francisco seem to be within a few areas, so this trip will be doable in a relatively short time. So take down some notes for this special road trip and get ready to buckle up. First things first, check out the road trip map: 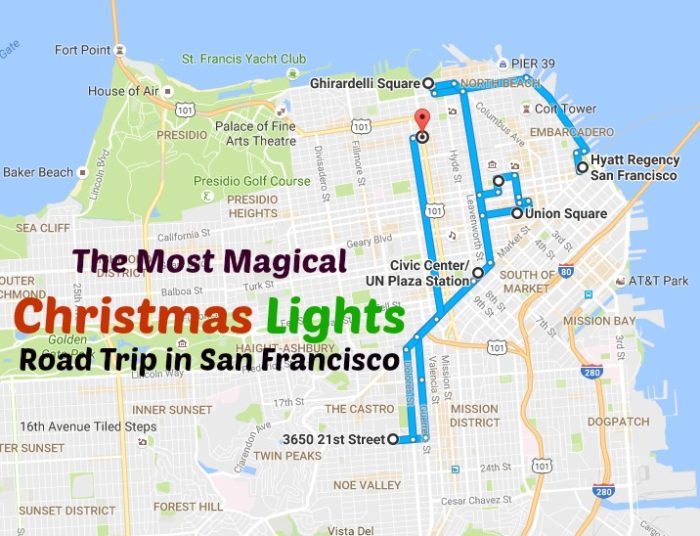 What are your favorite Christmas light displays around San Francisco? Did we miss anything? Let us know in the comments below!

If you’re curious about other great things in Fog City, check out these 10 unforgettable San Francisco tours.

Things to Do in San Francisco

Which parks should I visit in California?

Don’t let the nine national parks in California have all the fun! There are 279 state parks in California to explore too! At 1,017 acres, Golden Gate Park is the biggest within San Francisco. Here, you’ll find walking trails, gardens like the San Francisco Botanical Garden and Japanese Tea Garden, and even museums, like the de Young Museum and the California Academy of Sciences, non-motorized boating on Stow Lake, and much more. The Muir Woods National Monument in Mill Valley is another must-spot in San Francisco, especially if you want to some native Pacific coastline redwood trees. Within its 558 acres, you can hike six trails through the Redwood Forest, including boardwalk trails and those that lead out to the Pacific Ocean.

What are the best Christmas towns in California?

While you can see many Christmas light displays around San Francisco, there are also several Christmas towns in California. Due to Disneyland being part of the city, Anaheim is a really great Christmas town to visit during the holidays. Not only is the 510-acre park loaded with decorations, but there are also light displays as well as the Christmas Fantasy Parade, a holiday parade that runs from the middle of November to the week after New Year’s. Or head to Santa Barbara County’s Solvang. Here, you have a few options for where to take in Christmas. You can head to see the windmill and its surrounding holiday décor, take in the beautifully decorated trees in the downtown, or over to Solvang Park to see the Hans Christian Andersen Statue as well as the festive lights and decorations that are displayed there.

What are the best fairs and festivals in San Francisco?

No matter the time of year, you will find some of the best fairs and festivals in San Francisco. The Chinese New Year Festival has been a part of the city since way back in 1851. It takes place in Chinatown for two weeks in January and February and features a parade, floats, dancers, bands, a Golden Dragon, firecrackers, and a whole lot more. Moving on to April, if you are in or around San Francisco, you should definitely check out the Cherry Blossom Festival in Japantown. This is one of the largest events in the area and features an assortment of activities and entertainment, such as a parade, music performances, calligraphy and origami displays, food and drink, and of course, flowers.

0
shares
Like this article? Join the Only In San Francisco Facebook page for more.
Julian Garr
Follow me on:
San Francisco-based freelance writer doing ESL. I love traveling, exploring, and coffee.

Only In San Francisco