What Happened To This Abandoned Arkansas Amusement Park?

The amusement park once known as Dogpatch USA, located along Highway 7 between Harrison and Jasper (now known as Marble Falls), was opened in 1968 as a tribute to popular comic strip Lil’ Abner, created by Al Capp. The long-running comic’s colorful and often stereotypically hillbilly characters lived in the fictional mountain town of “Dogpatch”, and the hilly, green Arkansas land that had been planned and purchased by the park’s creators was perfect for giving a real-life feel to larger than life characters such as Lil’ Abner, Mammy, Pappy, and Daisy Mae Yokum. The park had a successful start in its early years and well on into the 1980s as middle America flocked to the good old Southern theme park with fishin’ holes, boat rides, and roller coasters, but poor investment plans led to the park’s demise and eventual closing in 1993.

Nature didn’t take long to reclaim Dogpatch USA. For nearly two decades the property was abandoned and left unkempt by the deed owners. The folksy exhibits, crazy rides, and old store houses, now empty, were overrun by weeds and wildlife, much like the land had originally been before 1968. Arkansans were quite aware of the park’s very public financial struggles as well as its disrepair, as the land soon became an attraction for explorers despite the law forbidding trespassers to walk through the remains of the park. Of course there are those who would consider going to the abandoned park just for a look; it’s forbidden, after all, and that just increases the temptation, you know!

A tragic incident on the park’s property in 2005 would strangely enough see a 17-year old boy owning the deed to Dogpatch. Young Pruett Nance claimed to have permission from the Dogpatch property owners to ride his ATV on the premises and was severely injured when coming into contact with a wire strung between two trees while he was riding. Whether the wire was planted as a trap maliciously or not became a legal issue. Nance later became the owner of the abandoned park after a lawsuit was filed and the park owners failed to pay the judgment ruled against them for the boy’s traumatic injuries. Although Pruett would thankfully recover from his horrific wounds from the wire on the property, one might wonder…what would a 17-year old kid do with all that land, anyway?

Little was in the news about Dogpatch or its future after the Nance incident until August 2014 when the property was bought by Bud Pelsor along with a group of investors. The property was renamed The Village at Dogpatch, an area where artisans, musicians, and just plain folks could meet and mingle. The park reopened to the public for the first time in December 2014 to a healthy crowd of thousands and has since had a number of events and gatherings in 2015, including the Heckuva Halloween festival that is currently being held from October 22-24th. It’s great to see the park making a comeback after so many years of abandonment! Be sure to check the Dogpatch Facebook (Facebook.com/DogpatchUSA) out for upcoming events! 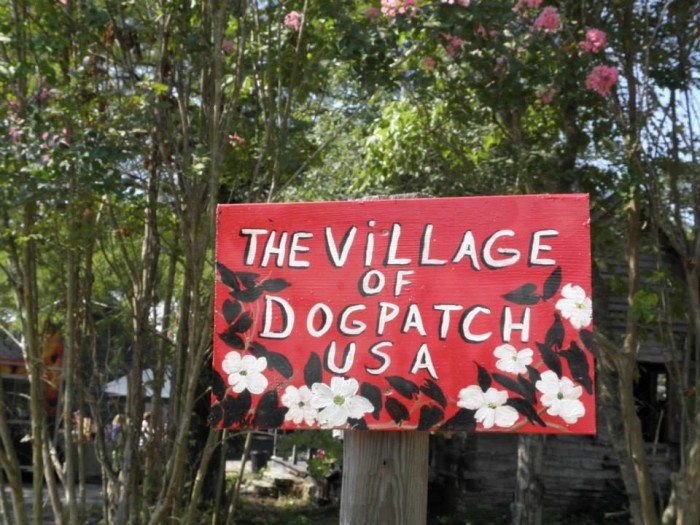