There’s Absolutely Nothing Like The Famous Chincoteague Ponies In Virginia

With the death of Chincoteague’s most recognized pony, Surfer Dude, this week, more eyes than ever have turned to the famous band of rugged island ponies. Long celebrated for their annual swim from their home on Assateague Island to neighboring Chincoteague, the ponies possess a near celebrity status in Virginia. The Pony Swim, a nearly century-old event made famous by Marguerite Henry’s 1947 novel Misty of Chincoteague, will not be the same this year, as with the passing of Surfer Dude, the ponies have lost a leader and the locals a cherished icon. 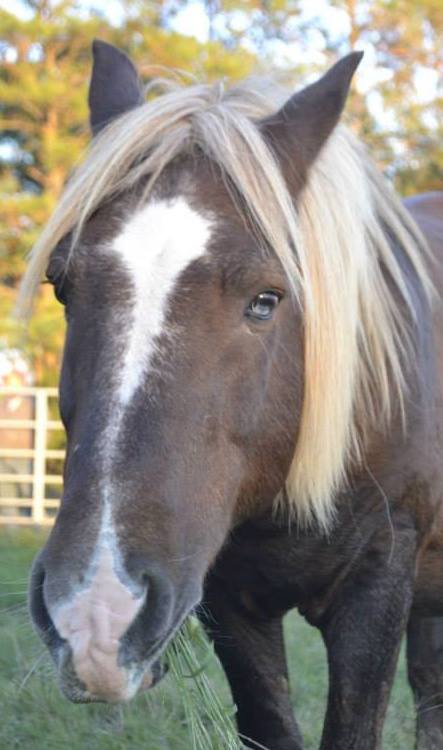 Surfer Dude’s remains were discovered on May 13, 2015, at the south end of Assateague Island by one of the island’s “saltwater cowboys.” Reports say that he most likely died of natural causes, despite a declaration of good health at his annual fall check-up.

With his chocolate-colored coat and striking flaxen mane, Surfer Dude was the most recognized and beloved pony since Misty herself. As the herd’s alpha stallion, Surfer Dude led a band of as many as 17 mares at any given time and sired dozens of offspring in his 23 years, an impressive age for a pony who spent his entire life in the wild.

Surfer Dude’s death is like the passing of an old friend for many members of the Chincoteague Volunteer Fire Company, the organization that “owns” the herd and oversees their health and well-being. He was known for his gentle spirit, leadership and playfulness, once even leading his herd voluntarily across the channel from Assateague to Chincoteague and invading a local campground in the middle of the night.

Since the news of his death came out several days ago, the Chincoteague Volunteer Fire Co. Facebook page has been flooded with condolences and memories of this beautiful blonde stallion and it’s not likely his legacy will be forgotten as his striking characteristics continue to show up in generations of the foals he has sired. 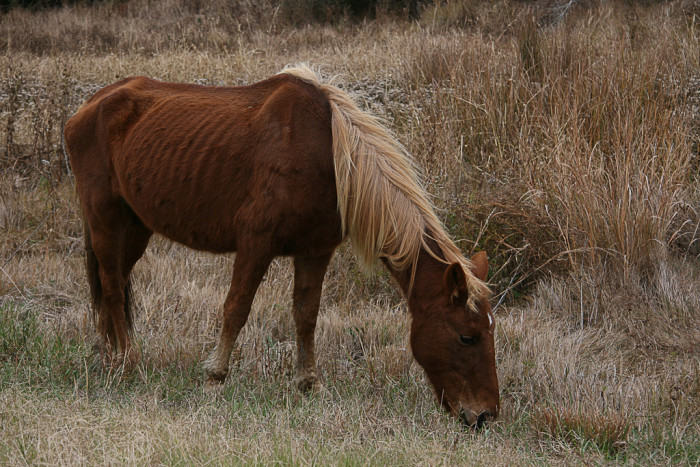 An unnamed pony grazes on the island. While his parentage is unclear, he is an example of the striking characteristics that Surfer Dude has passed on to future generations.

Reports say that his son, Riptide, who bears an almost uncanny resemblance to his father, has taken over leadership of Surfer Dude’s herd.

The Chincoteague Ponies, as they’re known, despite inhabiting Assateague Island, have long been a source of intrigue, fascination and pride to Virginians, not just on the Eastern Shore, but around the state. In fact, as their stories have spread through various media outlets, people everywhere have come to love the beauty, versatility and gentle personalities of the island ponies, prompting the formation of “Chincoteague Pony Associations” as far away as Washington State.

Here are some interesting facts about these remarkable animals that you may not have known.

1. The ponies have been living wild on the islands for 400 years.

While theories vary, the most commonly accepted legend states that the ponies of Assateague and Chincoteague are descended from Spanish horses who made their way to shore after a Spanish galleon shipwrecked off the coast of the islands in the 1600s.

2. The first recorded “pony penning,” the predecessor to today’s more formal “Pony Swim and Auction,” was in 1835, but the practice most likely started in the 1700s.

“Pony penning” was a practice started by the first inhabitants of the mainland to claim, brand, break and harness loose herds. Much like the Pony Swim and Auction, it was an annual tradition accompanied by festivities. Today, the act of pony penning still precedes the ponies’ swim.

3. The first official Pony Swim and Auction was held in 1925.

When a round of fires devastated Chincoteague in the 1920s, it became clear that the fire department needed to update their equipment. In 1925, the Chincoteague Volunteer Fire Company was granted permission to hold a carnival and auction to raise money for new equipment. Fifteen ponies were sold and soon, it became an annual event as national interest grew. By 1937, as many as 25,000 visitors attended were in attendance. In 1947, the ponies were acquired officially by the fire company and the herd was moved in its entirety to Assateague Island, returning to Chincoteague only for the yearly swim and auction.

4. In 1994, the Chincoteague Pony became an official registered breed.

The average Chincoteague Pony is between 12-14 hands – although a “pony” by definition must be under 14 hands. They are stocky, typically with short legs, round bellies and thick manes and coats that protect them in the harsh winters. Because they survive on the salt water cord grass that covers the island, they drink twice as much water as a normal horse to make up for the high salt intake, hence their round bellies.

5. Every spring, summer and fall, the ponies are checked out by veterinarians.

Although the ponies are wild, they are very much loved. The Chincoteague Volunteer Fire Company uses a portion of the proceeds from their annual auction to make sure the ponies are in good health. The summer check-up happens just before the swim to ensure that all the ponies are prepared for the journey. The fire department also provides hay and other supplemental supplies when food becomes scarce during the winter months.

6. Misty of Chincoteague was based on a real pony whose fame led to much of the popularity of the Pony Swim as we know it.

Misty was born in 1946 at the Beebe Ranch on Chincoteague Island. When the author, Marguerite Henry, visited for pony penning festivities later that same year, she was looking for inspiration for a new story and found it in Misty. She wanted to buy the foal, and while, at first, the Beebe family refused, they eventually conceded on the condition that their grandchildren would be included in the story.

Misty of Chincoteague eventually became a best seller, a Newbury Award winner and a feature film. Misty had three foals, all of whom were born back on the island, including Stormy who was born days after the devastating Ash Wednesday storm of 1962 in which dozens of ponies died and the entire island of Chincoteague was flooded. She survived by living in the Beebe’s kitchen after her barn was flooded. In Stormy, Misty’s Foal, Henry told the true-to-life story of the storm and it, too, became wildly popular after its publication in 1963.

7. Chincoteague Ponies have been historically bred with other horses, including Shetland Ponies, Mustangs and Arabians.

Periodically, other horse breeds were introduced to the ponies’ bloodline, mainly to reduce inbreeding, create color variations and improve overall breeding. In the 1900s, a number of mares were sent to an Arabian horse farm in Florida to breed with Arabian sires, resulting in a slightly larger pony than the “original” breed.

8. Chincoteague Ponies live all over the country.

Thanks to the yearly auction, people from all over the country are able to own their own Chincoteague Ponies. Every year, about 60-70 foals are born on the island, but most are auctioned off as the herd must stay at approximately 150 adults. However, every year, a few ponies are designated as “buy backs” meaning they are purchased, but given back to the herd to remain for the rest of their lives. In 2014, 54 ponies were sold with the highest bid at $21,000 and the lowest at $700. Overall, $149,700 in sales went to help the efforts of the fire company.

9. Safety is first during the annual swim. The ponies only swim at “slack tide.”

At “slack tide,” the time between tides when there is no current, the ponies will begin their swim. The first foal to reach the shore will be crowned King or Queen Neptune and will be given away in a special raffle later in the day.

10. Chincoteague Ponies are some of the best horses to own.

There’s a reason these ponies are so well-loved. Not only do they have exceptionally sweet, outgoing temperaments, but they are gentle, making them perfect for kids or adults to ride. They are also incredibly athletic and can be ridden in almost any fashion, a fact they’ve proven in show rings and competitions time and again.

This year’s Pony Swim and Auction will start with “saltwater cowboys” rounding up the ponies on Assateague Island on July 25 and 26, 2015. The following day, they will be moved down the coastline to the south corral where they will get ready for their swim on July 29. After the swim and a parade to the carnival grounds on Chincoteague, the ponies will be penned until the auction on Thursday, July 30. Finally, on July 31, the remaining ponies will swim back to Assateague where they will carry on in the wild until the following year. 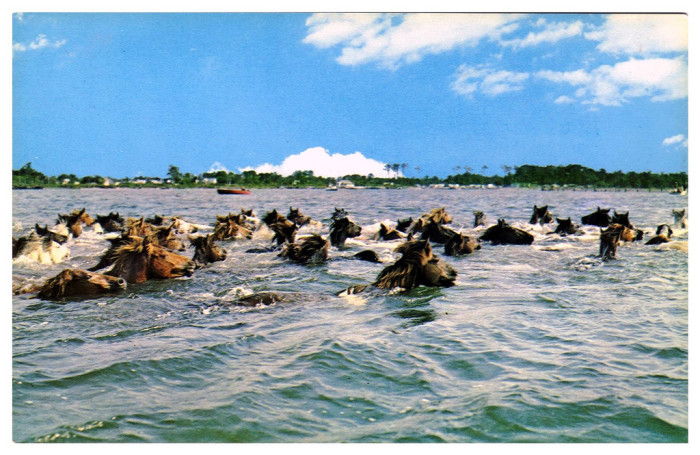 There is no question that Surfer Dude will be sorely missed at this year’s swim – and in the many years to come. However, if you are able to attend the event, you most certainly will hear many touching stories and recollections of this beloved pony. And perhaps, if you get lucky, you may even see Riptide, with his flaxen mane, carrying on his father’s legacy.

If you had the chance to see Surfer Dude, either at a Pony Swim or during a visit to the islands, please tell us your stories! We would love to hear more about this little horse that earned a big name.

Virginia In Your Inbox

Thank you! You'll receive your first newsletter soon!
0
shares
Anna Strock
Virginia staff writer for Only in Your State, freelance writer and journalist. Even though Anna has lived other places, somehow Virginia is where she always seems to land.

With Rental Cabins And A Treetop Walk, Explore Park In Virginia Will Bring Out Your Inner Adventurer

One Slice Of The Pizza From Pizzeria Bella Vista In Chesapeake, Virginia Will Transport You To Italy

Keep Your Eyes Peeled, Thousands Of Hummingbirds Are Headed Right For Virginia During Their Migration This Spring