In the wee hours of the morning on Tuesday, June 26, lava that had slowly been creeping away from the Kilauea Volcano for the last three months finally reached the Pacific Ocean, nearly six miles away. Shane Turpin, of Lava Ocean Tours Inc, was one of the first to arrive on the scene, and the footage he captured is breathtaking, to say the least. On Monday, the lava crossed the emergency road connecting Chain of Craters Drive in Hawaii Volcanoes National Park with the Kalapana area, and it was only a matter of time before the lava hit the ocean.

Considered to be one of the most active volcanoes in the world, Kilauea has been constantly erupting since 1983, and shows no signs of stopping again anytime soon. According to the United States Geological Survey Hawaiian Volcano Observatory, the last time lava entered the ocean off the coast of Hawaii was August 2013. The lava flow didn’t stop then, but merely changed direction and flowed instead to the east, threatening the village of Pahoa in its wake, before again shifting directions back to the south, to the coastal plains of Kilauea’s southern plank. 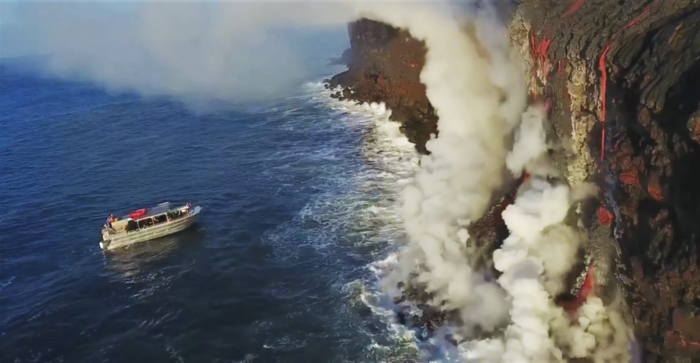 Isn’t Mother Nature simply fascinating. For more information about Hawaii’s origins, and the many volcanoes that make up our beautiful islands, check out these 12 Hawaiian volcano stories.

Hawaii In Your Inbox

Thank you! You'll receive your first newsletter soon!
0
shares
Megan Shute
Follow me on:
With more than 10 years of experience as a professional writer, Megan holds a degree in Mass Media from her home state of Minnesota. After college, she chose to trade in her winter boots for slippahs and moved to the beautiful island of Oahu, where she has been living for more than five years. She lives on the west side but is constantly taking mini-road trips across the island and visits the neighboring islands whenever she can getaway. She loves hiking, snorkeling, locally-grown coffee, and finding the best acai bowl on Oahu.